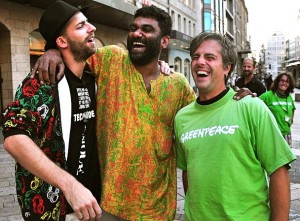 It will come as no surprise that the highest achieving face-to-face fundraisers you are likely to come across are also among the most highly motivated people working in any organisation. How else do you imagine they deal with a working life that places them on a daily collision course with public indifference, slamming doors and verbal and physical abuse and yet still come away at the end of their shift holding onto their sanity never mind a bunch of new sign-ups for their non-profit?

Managers are aware of the importance of this fuzzy thing called ‘Motivation’, some even spend a lot of of time, effort and money in the hope that their team will be motivated enough to get through the day with success and show up for work again the next day. But despite this awareness and the efforts put in place to harness motivation there is still a constant “churn and burn” of staff. Why? Is it enough to shrug and explain ‘it’s a tough job and not everyone is cut out for it’? Or could it be that, despite good intentions, the face-to-face world has a spectacularly inaccurate and, in fact, deeply damaging misunderstanding of what motivation is all about?

This blog post owes a gratitude to two thinkers in particular: Frederick Herzberg and Dan Pink. Herzberg, a psychologist whose studies in the 1950s and 1960s produced findings about motivation, should be required reading for every manager in every organisation in every sector. His revelation was that the things that motivate us are fundamentally different from the things that demotivate us and that an absence of demotivation does not therefore equal motivation. Sounds simple enough but a lot of mangers get this wrong. For true motivation jobs must be enriched.

Rather than rehashing all the points he makes in his article ‘One More Time’ I suggest that the curious readers read it in it’s entirety here.

The other chap who inspired this blog post is Dan Pink, author of “Drive: The Surprising Truth About What Motivates Us.” Pink asserts that the ‘Carrot & Stick’ method of getting results is outdated and even damaging to productivity. Instead that there are three factors that motivate people to achieve outstanding results in their work: Autonomy, Mastery and Purpose (Herzberg would call this Job Enrichment).

In my own experiences working with face-to-face programmes from Bangalore to Boston to Budapest and Beyond the most common practice I have observed of getting fundraisers to deliver results is the “Carrot and Stick” approach. The ‘Carrot’ rewards the sort of results that make a manager happy and the ‘Stick’ punishes an unsatisfactory result. 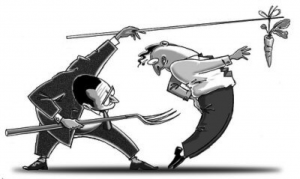 Think for a moment of the complicated wage and bonus structures that are designed to incentivise high results. Or competitions. Or a promotion. These are all classic face-to-face Carrots. Or for Sticks think of warnings, or just plain getting fired. Using a Carrot or a Stick might produce results, but to classify these tools as motivation is inaccurate. People are moving because they are afraid the stick will hurt or they are hungry for the carrot not because they want to move. Herzberg calls this the ‘Kick In The Ass’ (or KITA) style of getting results.

The drawback of the KITA method of getting results is that it requires ever increasing measures to get the same results: wages must keep going up, prizes more elaborate, the need to satisfy egos result in levels of unnecessary mid-level management (Assistant Regional Vice Street Captain anyone?). The Kick In The Ass must get harder and harder just to achieve the same level of performance. Herzberg’s puzzle was how to install in people a self-starting generator, one that requires no constant kicking. Real Motivation.

It may surprise you that the highest achieving face-to-face programmes I have come across are the ones that pay zero financial incentives to their team. Zilch. Staff are paid well enough that money is not an issue. Many are shocked by this and wonder “How are the staff motivated to work then?” But maybe complicated salary and bonus structures are a lazy manager’s tool and they alone will never lead to the desired result: self starting workers. In fact an MIT study found that offering financial rewards can lead to lower achievement when the task requires more than basic cognitive skill. 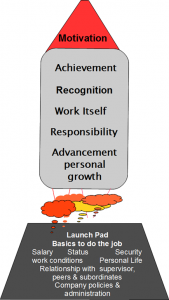 Herzberg would classify paying a livable salary as managing a Hygiene factor. The rocket diagram to the left is a nice illustration of Herzberg’s theory of motivation/hygiene. In order to launch into the stratosphere of great performance a solid base of satisfactory hygiene factors needs to be laid.

Taking the issue of money off the table, increasing job security and decreasing supervision might sound scary to managers but, hey, this blog is intended to be thought provoking. Sure, managers can continue with the tried and trusted method of Carrot/Stick if they want, as long as they are content with ever increasing costs and low job satisfaction and are happy to oil that revolving door for fundraisers on their way out.

Once the fear is out of the way the real task of enriching the fundraisers job with greater Autonomy, Mastery and Purpose can begin. There are a number of steps to follow (and I point to Herzberg’s article for the complete list) but the most crucial to be aware of are:

1. Believe that the job can be enriched (otherwise stay with Carrot/Stick)
2. Test with a small group. Have a control group.
3. Be prepared for an initial drop in performance.
4. Give staff a natural unit of work (maybe increase the recruiters’ job to include some retention work).
5. Remove supervision and increase individual accountability.
6. Use mangers as coaches instead of supervisors.
7. Allow people to become specialists at what they do
8. Understand that Job Enrichment is an ongoing process, but ultimately less repetitive and costly than Carrot & Stick.

My observations from face-to-face programmes with great results and high motivation are:

The question is do you really want to make some fundamental changes to your face-to-face programme and motivate your crew? Or do you want to continue to just move them and in the process perhaps move them closer to that ever revolving door?

This post was originally posted on 101fundraising by Jack Ryan.