According to research published by the Resolution Foundation, young workers aged 18 to 29 could be earning 2.7 times more if they had changed jobs between 2007 and 2014.

In their Q4 Earnings Outlook, published last week, a feature on job mobility and youth earnings unveiled that young people who had switched employers in that time saw their earnings increase by 11.8%, compared to just 4.4% for people who stayed with the same employer. Job mobility is ‘the propensity of workers to voluntarily move between jobs’, and it is both an indicator of confidence in the jobs market and a precursor to individual pay increases.

‘Job mobility has implications for wages and productivity at both the individual and economy-wide levels, and is particularly important for those at the start of careers… by inhibiting pay progression at the beginning of careers, our new analysis shows that lower mobility may have increased the pay squeeze for young people by as much as one third, and threatens their future earnings potential,’ said Resolution Foundation’s Laura Gardiner.

This ‘lower mobility’ refers to the fact that young people are switching jobs at a rate that is 10% lower than it’s peak in the early 2000s. In fact, if job mobility hadn’t slowed down post-2008, the average per-hour salary for young people would currently be 30p higher. 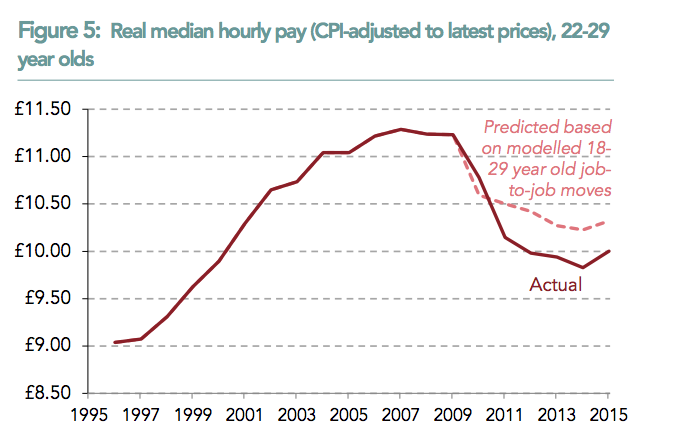 Despite the economic implications, is it naive to assume that the priority of young people in the jobs market is their earning potential? A study conducted by PWC found that young people value personal learning and development and flexible working hours over financial rewards in their workplace. They also seek employers that accommodate their personal values and allow them to be their authentic selves, and also feel a high level of social responsibility; 84% believe that “knowing I am helping to make a positive difference in the world is more important to me than professional recognition.”

The professional values of young people aren’t necessarily focused on their salary. Even though switching jobs might be financially beneficial in the long term, they place a higher importance on authenticity, workplace culture, and contributing to a purpose bigger than themselves. It remains to be seen what impact this might have on the UK economy.